From the 4th to the 8th centuries Christianity slowly approached the boundaries of the Nordic countries.  A lot of missionary work was carried out among the southern Germanic tribes, and many peoples were converted. By degrees the converts were included in the strong organization of the Roman Church, and the peoples of southern and western Europe were united within the same spiritual church.

The Franks were converted around the 6th century, the Anglo-Saxons in the 7th century. Then followed the Frisians, and when around the year 800 Karl the Great defeated the Saxons, Christianity reached the Danish borders. In Denmark this religion was already known through trade with England and the Frisian town of Dorestad, and in 826 Ansgar arrived in Denmark.

This Nordic movement south was partly due to their love of fighting and looting, but the main factor was probably overpopulation in their own countries, as the developed agricultural land could not provide for them all. This situation lasted for more than 200 years  with the Normans raiding in the south, and the Christian culture moving north. It only stopped when Christianity had gained ground in Denmark and Norway.

.
The Raids of the Normans

The sources are foreign chronicles. The Icelandic Sagas are often not trustworthy. Saxo does not know the exact period of the Vikings

.
The Armies of the Vikings

The term ”Normans” was applied to all Nordic warriors. At first they came in small flotillas under one single chief. Later the flotillas became larger because the chiefs joined forces, and supplied the ground force with their own warriors. One of the chiefs was the leader, and the others obeyed him  in battle without hesitation and still considered themselves equal to him. When the Franks asked the conqueror of Normandy the name of their master, they answered,”We have none, we are all equal.”

When the army camped near a hostile population, severe discipline and firm rules were required to maintain peace among the Nordic warriors. Saxo has written down a series of ”laws” and the punishment for not obeying them, for not sharing lootings, and so on. Saxo dated the laws to the time of Frode Fredegod. They may be the Vikings’ legal laws. 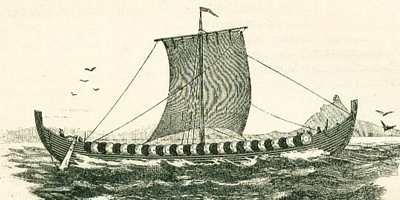 The Vikings who stuck together via strict discipline were far better skilled in the art of war than the Christian people. The Nordic peoples were unequalled when conquering armed towns; they could drag their vessels quite a distance over land, and when in danger they pulled together in an impenetrable rampart of shields.

The attcked peoples were weak and divided. After 840 the Carolingian country was split up into three parts, and each of them was again split up because of strife within the royal family, and because of the wilfulness of the vassals, so that each area had to fight off their own enemies. It must also be mentioned that neither the Franks nor the Anglos had any sea power. So the Normans could easily approach the coast and even sail far up the rivers without local interference. In their fast vessels they aimed straight for the place they were set on conquering, and they were so swift that the defence never had time to assemble. The Normans did not need to prepare fighting at sea. Their vessels were overloaded with people.

The Viking flotillas were transport flotillas, not war flotillas. Only the countries that armed boats to meet them at sea were able to keep them away, people like Alfred the Great, and the Spanish Moors. The wild attacks of the Normans filled the Christian peoples with horror. In the churches they prayed,” Liberate us, oh God, from the ferocity of the Normans.”

The Viking Raids until 911

Shortly before the year 800 the first Vikings showed up on the shores of England and France and for more than one hundred years the raids continued with still more cruelty right up to the Conquest of Normandy when the raids became much less frequent. In that 100-year period a three-step development can be seen:

1: Only small scale fleets plunder here and there on the coasts whereupon they hurry home with the loot.

2: The treasures attract a lot of attention and the small fleets join together under one chief. They dare go far up the rivers to find the richest churches and monasteries in the interior of the countries. The goal is still only plundering. Regnar Lodbrog is the most famous naval hero of the period.

3: From about 850 it becomes normal for the Vikings to hibernate in the foreign countries, at first on islands or in the mouth of a river, later in armed camps on land, from where they often subjugate large areas. The fleets are enormous and for years drop their anchors in wide rivers like the Schelden.

The Vikings are now regarded as ”the army,” and they go ahead according to a firm plan. The Vikings bring women and children from their homes. In some places the raids are still mere plundering, but in other places migration of people comes into play. In this period the Lodbrog sons conquer the North of England. The borders of the Danish lands in England – the Danelag (the Danelaw) – are agreed upon in 878. Svearne founds Gardarige. In 911 Rollo conquers Normandy.

The migration from the North is on a minor scale, and new Norman states of significance are not created. Those who migrated to the west converted immediately after settling down. Little by little they changed their language into that of the conquered people. The Danelag became dependent on the English kings. Nordic kings and sons of kings often went on Viking raids. This also applied to Knud Danaast, Olav Tryggvason, and Svend Tveskæg, who started to ravage and plunder England.
.

The Conquest of England

Svend Tveskæg’s repeated forays led the way for the Conquest of England in 1013. This decisive raid was of quite another character than the previous ones. Now it was not a chief followed by his warriors, but the King of Denmark, who with the consent of his people used their boats and thus conquered both the Danelag and the Anglo-Saxon lands. The Danish rule over England lasted from 1013 to 1042. Svend Estridsøn twice sent out his fleet to renew this supremacy, but accomplished nothing, and Knud den Hellige prepared for a large expedition to England, but had to give it up. The Viking raids on England ended in the 11th century.

The Norwegian King Harald Haardraade was the last regular Viking king in the Nordic countries. For many years he had been chief of the Varangians in Miklegaard (Constantinople). He lost his life in a raid on England against Harald Godvinson (at Stanford Bridge in 1066). Also his grandson Magnus Barfod (died in 1103) raided Scotland and Ireland. The Viking raids ended with him. The Nordic peoples were now Christian. Their desire for fights and adventure was  chanelled into working for Christianity. The Viking raids became crusader raids, partly to the Holy Land (Sigurd Jorsalfare), partly to heathen neighbours (Venders, Estonia, Finland). 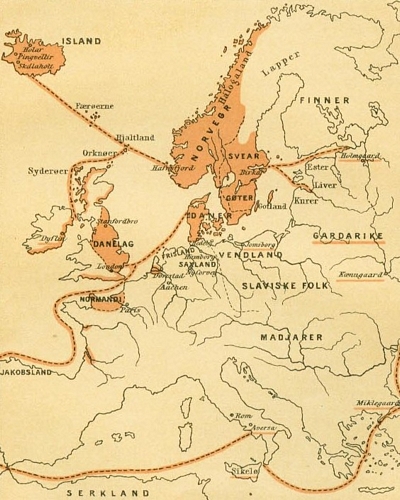 Geographical View of the Norman Countries

The Danish, Swedish, Norwegian, and finally also the Icelandic peoples  worked together on the Viking raids. They also shared almost the same language – the Danish tongue. However, they did enter into conflicts with each other: Norwegians and Swedes fought each other in Ireland, and the cunning Swedes captured the lands in Kjev that two of the Danish Lodbrog sons had founded. The Swedes mostly went to the east, the Norwegians to the west, and the Danes to the southwest. And the Norwegians were not only conquerors of Christian land, but also settlers on until then unknown islands and shores.

Along the Finnish Bay and the Bay of Riga small Swedish villages were established. Along the river roads trade with Byzantium and the Arabs developed. Swedish armies forced their way into the country, and the defenceless Slavs let the foreigners whom they called ”Rus” (hence: Russia/Rusland) founded Gardarige (Gaarderige) with Hilmar (Novgorod) as the capital. From here the Emirs sailed down the Dnjepr and conquered the country of Kjev, which had been founded by other Normans, who had also raided Miklegaard. New hordes of Nordic warriors obtained service as huskarls, partly with the Russian Emirs, partly with the Emperor. They were called Varangians. The Slavs were very backwards culturally and had no influence on the Swedish Vikings. So it is understandable that the development in Sweden was slower than the development in Denmark and Norway in the late Middle Ages. However, very soon traces from Byzantine culture were to be found in Russia.
.

The Norwegians’ nearest and oldest settlement was situated in Hjaltland (the Shetland Islands). From here they went partly to the north west, partly to the south west. When taking the first direction they got as far as the Faroe Islands and Iceland (874), and from Iceland they arrived in Greenland and Vinland around the year 1000. To the south west they settled in the Orkneys, the Suder Islands, the Isle of Man, and the coasts of Ireland, where they came across the Danes. The Norwegians worked mostly with the Celtic people, and were influenced by their rich cultural life, which can be traced in their poems and sagas. In the 10th century the Norwegian Vikings were strongly influenced by the Anglo Saxon Church (Olav Tryggvason and Olav den Hellige).
.

The large armies that conquered the North of England came from Denmark. The borders of the Danelag ran from London to the northern part of Wales. Here a lot of Nordic peoples settled down observing their own laws. The English jury system is supposed to have originated from their courts of law. They embraced Christianity and as time went by also the Anglo Saxon language, and eventually they came under English rule. When in the 11th century the Seine-Normans established a new country in the south of Italy (Aversa 1029) and conquered England in 1066, they had adopted the French language completely. From 1013 to 1042 all of England belonged to the Danes, and from the time of Knud den Store as an independent kingdom.

Because of all these expeditions Denmark was strongly influenced  as to religion and culture by the most important  peoples of that time – the Franks and the Anglo Saxons.