On the small runic stone we find the oldest words from a Danish king and for the first time in Denmark the name of the country is mentioned. Nevertheless the name had been used for at least 75 years in Europe. King Alfred the Great – King of Wessex (871-899) and very much interested in culture – wrote a geographical description of Northern Europe and used the word “dene mearc” about the Danish area. Regino’s Chronicle, which was written around the year 900 in the convent of Prum near Cologne, also mentioned “Denimarca,” so the name was already known when Gorm used it.

King Gorm died in 958/59. If the human remains found under Jelling Church belong to him, he must have been between 35 and 50 years of age at his death. His son Harold took over just before 960, so Gorm must have been born between 908 and 923. He made the stone in memory of his wife, who died before him. We do not know when. The stone was erected between 940 and 958 and we know that Gorm was announced king at the beginning of the 940s.

The words “King Gorm” almost form a headline as the runes here are bigger than the rest. The word “kumler” is the plural and means “memories,” so there must have been more than one runic stone. Thyra was probably buried in a stone circle with the runic stone as a tombstone. Today we have very little hope of finding her burial place. If it was placed centrally, it must be inside the present church yard. Here, however, many new graves have destroyed all traces.

Speculations as to the original place of the small runic stone are many. On one of the barrows, at the head of the stone circle, or maybe near the present place? We know that in 1627 the stone was being used as a bench at the entrance of the church, and it was put up in its present place no later than in 1639. 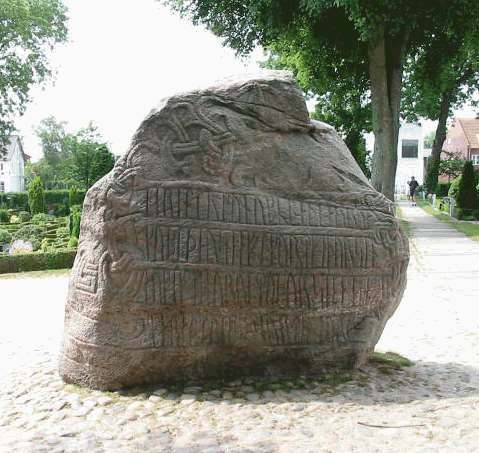 The inscription of the stone

ala auk nuruiak
al og Norge
and all of Norway