The translation of the runics

ala auk nuruiak
al og Norge
all and Norwey 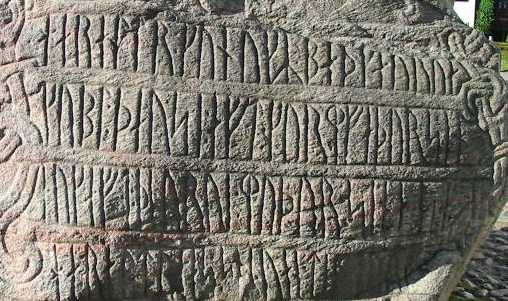 It is an old observation, that the large stone stands exatly halfway between the two burial mounds. If the assertion is correct, if really it can be proofed against the examination of the modern instruments, it beyond question speaks  that the stone is standing at its original place, for the people of the Viking period as known had a sense for symmetry. During the great excavations which was done in Jelling at the  beginning of the forties under the leadership of Ejnar Dyggve, an excavation was done at the large runic stone. It  appeared with certainty, that the stone has been moved, for one of the graves of the cemetery lay under it. It deserves notice, that the grave also lay under a grouping of stones, which was found under the runic stone, so that this foundation could have nothing to do with king Harald. The removal stands, but it can be discussed, whether it has been short or long, or if the stone only has been overturned and set up again.