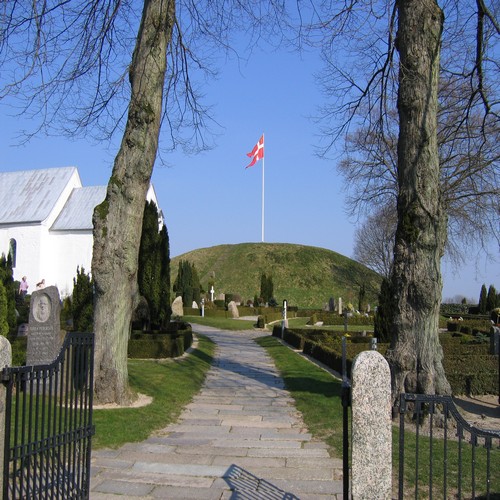 Thyra’s Mound is 8.5 metres tall and 65 metres wide and is made of turf, stone and clay on top of an old mound from the bronze age. Thyra’s Mound was the first burial place for Gorm the Old.  A hole was dug into the old mound to constitute a burial chamber, which was 6.75 metres long, 1.45 metres high, and 2.6 metres wide. The ground measures 17.5 m2 just like a large room in a house. Logs of 35-centimetre-thick oak were used. A layer of granite boulders surrounded the chamber to protect it from grave robbers. 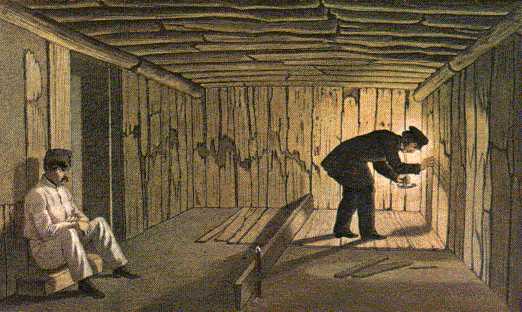 A view into the large burialchamber

The floor of the chamber is 1.75 metres above the surface of the ground outside, and the longitudinal direction is east-west. The floor is covered with boards. An up-ended board in the centre of the room had the specialists convinced that two people were buried there. The scanty grave goods do not prove that. If the skeleton parts found below the church – assumed to be the remains of Gorm the Old – have been moved from the burial chamber to the church, there was only one person in the burial chamber.

There was a pond on top of Thyra’s Mound. In 1820 it was drying out, and the people of Jelling were determined to deal with the situation. They thought they had to do with a spring that had been blocked, so they dug a hole 5 metres into the barrow  and found the wooden burial chamber. An opening was made down to the chamber, and it was discovered that others had been there before them. The grave had apparently been robbed.

Who Emptied the Mound?

The grave goods consisted of only few bits and pieces of great artistic value, but it was evident that the chamber had been robbed. Some of the boards in the ceiling of the chamber had been cut into two, and the pond on top of the mound could be explained by the accumulation of water after the break-in, and the clay preventing the water from running out. The pond can be seen in an old drawing from 1591.

But several things did not match the theory of the mound being robbed. There is no doubt that the burial chamber has been opened after the funeral; the hole in the ceiling proves this. The lack of grave goods, but also the lack of a body…?! Would the grave robbers have taken the body with them? You can hardly rob a grave like this in silence. After having found what is believed to be the remains of King Gorm in 1978, it is presumed that King Harold – after his conversion – wanted to give his father a proper Christian funeral, and therefore he opened the north mound and brought King Gorm’s body to the main burial chamber below the church in Jelling. This would also explain why no human skeleton parts have been found in the chamber. Other findings of clothes and wood show that the skeleton parts ought to be there, but if there was only one funeral there and it was a man’s funeral, why is the barrow then called Thyra’s Mound? A piece of wood including its bark was placed in a ct-scanner, and results showed that the tree had been cut during the winter of 958-959, which presumably was the time of King Gorm’s funeral. 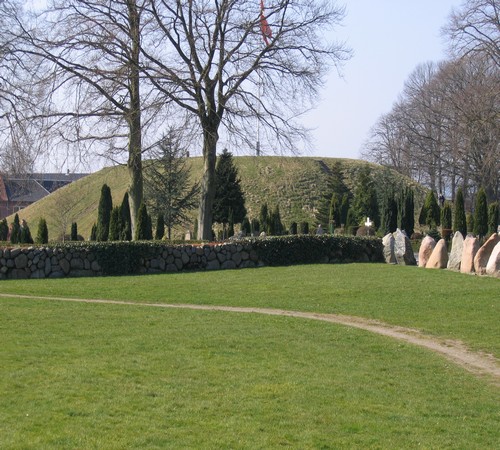 The two mounds on either side of the church are very much alike. The North mound contained a funeral site – probably that of King Gorm. The South Mound is empty . It consists of only earth and turf, and it is not known when it was built. Was it a memorial mound? In 1861 King Frederik VII wanted to find the burial chamber of King Gorm in the South Mound, but there was nothing there apart from granite boulders and pieces of wood.

At the bottom of the mound was found a single-stone monument in the shape of a ship. There were no traces of a burial chamber. The mound is 11 metres tall and 80 metres wide.

Some of the pieces of wood found there were dated to approximately 965-970. The South Mound has been built a few years after the North Mound. We do not know why this enormous piece of work was carried out. Perhaps it is in memory of an important person…?