For about 300 years, from before the year 800 until almost the 11th century, the Scandinavians are highly conspicuous in their efforts to gain new lands. Scandinavian hosts establish themselves in the West and the East, they are in evidence in the Frankish area, they ravage the coasts of the Mediterranean, and they feel at home in Constantinople in the Emperor’s Court. It is a Scandinavian time of expansion, which has its counterpart in the British expansions in the 18th and 19th centuries when the British visited the coasts of the oceans of the world in large or small groups.

We can only guess at the underlying reasons for these Scandinavian naval expeditions and migrations. We must imagine that the settlement and cultivation of Scandinavia had gone so far that many young men found it too toilsome and unrewarding to clear new land, when the sea could take them to rich countries. In addition to that the population growth must also have played a part. And as the powerful kings increased their areas, the importance of the small kings and chieftains were gradually diminished. Their sons were the born leaders on these fantastic Viking raids, and there were always plenty of courageous young warriors willing to sally forth.

For a long time the Scandinavians had been famed for their skill in building ships which were long, narrow, light vessels propelled by oars. They had masts and sails, but only as subordinate propelling agents.

While the very early Viking raids and trading expeditions to Friesland very probably followed the coasts and never lost sight of land, we see in the heyday of the Viking Period around the 9th century that Scandinavian seafarers venture on to the open sea and suddenly appear in distant lands. At first they show up in small groups robbing cattle and plundering a farm or two or a monastery close to the coast. Soon, however, they unite in larger and larger numbers, and every summer they go ravaging along the coasts. Now and again they rob horses and venture into the countryside on expeditions lasting several days. When winter comes, they do not all return home, some decide to winter for instance on an island in an estuary, and the following spring they continue their practices. At last we see them arrive in big fleets and land huge armies that stay on in the country. They fight on from year to year and end up subjugating entire kingdoms. From their native countries still more ships keep arriving with more warriors. Often women and children accompany them.

At the end of the 10th century the Scandinavians have settled and now rule extensive areas far removed from their origins. We come across them as masters far away on the Eastern European steppes and in most of the British Isles, in Iceland, and soon also in the estuaries of the Seine. All the peoples along the European coasts fear the dragon-stemmed Viking ships with the raven banners. 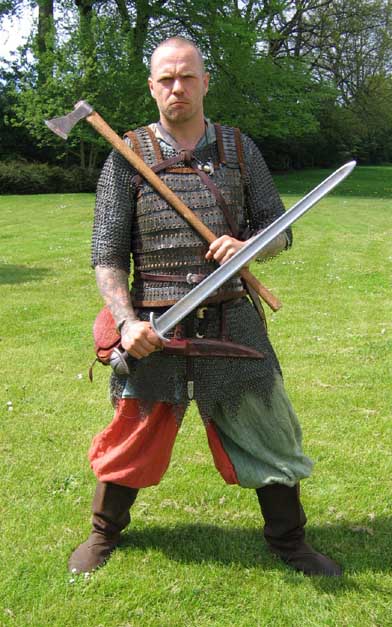 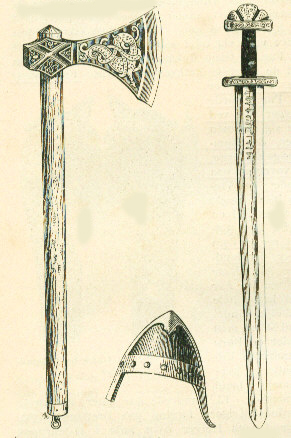 .
:
The preferred weapons of the Vikings were the broad-bladed battleaxes  which only they used. The sword was very much used as a war weapon and was often of high quality. Many swords came from the Rhineland because of their high quality.
The Viking helmets were made of metal.
The Viking shields were made of wood, reinforced with iron and decorated with paint.

It is not always easy to determine from which area of Scandinavia a specific Viking army came. The victims from whose chronicles we must gather our knowledge had a hard time distinguishing among the various Scandinavian tribes as they spoke the same language. It is evident that the hosts that went East to the countries of the Finns and the Slavs came from Svealand (Sweden).
Likewise it is quite likely that especially the islands in the North Sea were the goals for Norwegian ships, but there has been much doubt as to the origins of the armies that went to Britain and the Frankish Kingdom. The chronicle writers seem to call the foreigners Danes and Normans quite haphazardly, and at any rate the two names are ambiguous. “Normans” originally means “men from Norway.” “Danes” is in actual fact the name of the people of Denmark, but as they were both the nearest and mightiest of all the Scandinavian people, it is probable that many Frankish scribes have used “Danes” because they could not differentiate. It is also quite likely that the Danish hosts have included people from Viken in Norway and Visigoths from Svealand. The largest number of Vikings came from Denmark and its neighbouring areas, but the Viking Raids did not start from there.

One day around the year 790 the inhabitants on the north coast of Britain saw sails appear on the sea. Foreign ships were heading for shore and wild warriors set foot on the coast. The Anglo-Saxon Chronicle says that there were three ships from Hæreqaland, which must mean Hørdaland, the well known west Norwegian region, which in those days was called Haruqaland. The Viking Raids started off from this area close to the sea, which was second nature to them, and they moved effortlessly at sea.

Straight west of Hardanger Fiord, only a few days’ sailing away, the cliffs of the Shetland Islands rise from the sea. And from there the way lies open to the Orkney Islands in the south, to the shores of Scotland, and on to Ireland.

While the Danes and other tribes also moving along the coasts of the North Sea found their way to the Anglo Saxon and Irish kingdoms, the Vikings from western Norway crossed the open sea on their way to the same regions. The Norwegians and the Danes did not stop there. They sailed through the English Channel and farther south through the Strait of Gibraltar and into the Mediterranean.

Our ancestors were now introduced to quite a different and varied world. They ravaged many different peoples with highly different cultural traits, and they learned a lot. The Scandinavian people have played an active part in their lives , but were influenced even more themselves by the Mediterranean cultures.