For a long time the Scandinavians had been famed for their skills in building ships that were long, narrow, light vessels propelled by oars. They had masts and sails, but only as subordinate propelling agents. The secret is the bottom of the ship where the strakes are not nailed to the ribs, but lashed. This clinkered construction made the ship strong yet flexible.

The Vikings had two different sorts of ships, the warships and the merchant vessels. The warships could sail very fast and were easy to manoeuvre, for instance in connection with surprise attacks, and could therefore get away very quickly. The ships were long and narrow and could glide through the water easily.

To build a Viking ship they preferred oak wood as it was very durable, but other species of timber could be used. It took a long time to build a Viking ship as they did not know the saw, but shaped the timber with an axe. The Vikings loved their ships and gave them names. They adorned them with dragon heads and beautiful carvings; they also decorated the sails with drawings.

Boat from the Bog of Nydam

The Nydam Ship dates to 4-500 years A.D. and is approximately of the same size and construction as the ship found in 1880 in a burial mound at Gokstad near Sandefiord, and which is several hundred years younger. 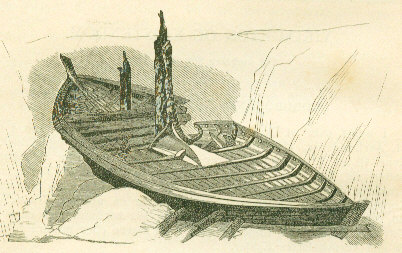 They both have much in common with today´s Nordland Ship. Both vessels are about 23-24 metres long and 3,20 metres wide. The first one carried 28 oars, the latter 32.

Carved posts from the Gokstad Ship designed to be mounted on the ship.

.The Battle of Svold, 1000 ad. Depicted on an older painting

It may be assumed that the majority of the Viking ships have been moderate as to size, and many were even very small. But quite frequently we hear of chieftains who built far bigger and stronger ships. Especially from Trondheim where the most famous of them all was Olaf Tryggvason´s  “The Long Serpent.” It was 48 metres long, twice the length of the Gokstad Ship, had high shipboards and carried 68 oars. It was as long as the big line ships from the times of Niels Juel and Tordenskjold, but not so wide or high.

The Scandiavian Viking ships were frightening to behold. Dragon figures in the stem, drawings of wild animals on the sails, the gunwale armoured with the Viking shields from rim to rim while rhythmic oar strokes propelled the fast moving boats onwards.

For generations every Scandinavian minstrel was familiar with this picture of the gigantic Vikings and their ways. In the song about Helgi Hundingsbane we hear of a Viking fleet in a harbour the night before their expedition starts. The giants are sleeping on board the ship under the pitched tents. At daybreak their chieftain threw the tents off the stern so that the heroes could see the coming of dawn, and they hoisted woven sails up the mast. Oars were creaking, iron clanging, shield crashing against shield. The Vikings pulled on the oars, the fleet rushed onwards far from land. When the waves met with the long keels, the sound was as if the heavy breakers and the mountains exploded.

The Ironbard must be mentioned as a particularly strong and elaborate war ship. It belonged to Eric, the earl of Lade. Like the Long Serpent it took part in the Battle of Svolder in the year 1000. At the top of the stem it was covered in iron spikes, and from stem to stern it was armoured with iron plates that went below the water line.