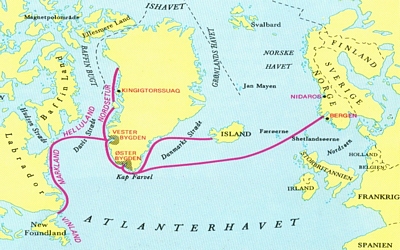 .Sea routes of the Vikings in the 1000 years ago

The Vikings in Greenland and America

Erik the Red was born and raised in Norway where he was, according to the Greenland saga, involved in a number of murders, and had to leave the country. He travelled from Jæren to Iceland, accompanied by his father Thorvald, and settled on the North west coast of the island. After the death of his father, he married Tjohild, the daughter of a wealthy man, and built a farm, “Erikstad” on the shores of Bredefjord.
.

Unfortunately, Erik found it difficult to keep trouble away from his doorstep and was banished from the area for slaying two men. He started work on building another farm, but before he could finish it he was once more at odds, this time with the farmer, Thorgest. This developed into a feud, and many lives were lost, including those of Thorgest’s two sons. Erik was brought before a jury, which exiled him, probably for about three years.

He had therefore to leave Iceland. However, he had heard of a land far to the West, and was determined to find it.
.

Gunnbjørn, son of Ulk Krake had spotted it a hundred years before, when he was blown off course by a storm.
.

And so it was that Greenland became inhabited by these Nordic Vikings, where they stayed for several hundred years. We don’t know for exactly how long, for no-one knows what the fate of these Vikings was.
The many Viking finds that have been made in Greenland, from hundreds of farmsteads, churches and monasteries have given us some knowledge of their almost five centuries of living in Greenland.
.

They were practically self-sufficient, though they had to import wood and iron from abroad. The ship “Grønlandsknarren” out of Bergen on the west coast of Norway sailed regularly to Greenland and supplied the necessary provisions.
.

The Northmen, or Norsemen, were a warlike people, but they were also farmers, hunters and fishermen and were capable of making their own tools. The vessels they used to store butter, cheese, and salted meat and fish were fashioned from soapstone which is common in Greenland. It is easy to work, and is fire proof. They were even able to fashion vessels so large from this material that they could hold ten to twelve barrels!

If they couldn’t get hold of raw iron the smelted it themselves from iron ore. They had blacksmiths who made axes, spear heads, arrowheads, knife blades and nails. They also carded, spun and wove cloth from sheeps’ wool, which they used, both to make their own clothes, and to trade for goods with the ships from Norway.
.

It was the Viking Leif “The Lucky” (Leif Ericsson), that in the year 1000 a.d. discovered America, or “Vinland” as he called it, not Columbus. He was given his nickname, “The lucky” because he was responsible for rescuing fifteen shipwrecked mariners marooned on a skerry (Islet) in Greenland.

Leif’s journey to America, along with thirty five other men, is recounted in both “The Saga of Eric the red, and Snorre’ s “Heimskringla”.  The honour for the discovery of America almost fell to Eric The Red, Leif had asked his father to be leader of the expedition, but as Eric was on his way to the ship, his horse stumbled and caused the aging chieftain to fall off and injure his leg. According to the sagas, he was heard to comment: “It was not meant for me to discover other lands than that in which we now live. We shall sail together no more.”
.

Leif and his people lived in “Vinland” for a year, after which they returned to Greenland, their ships loaded with grapes and timber. During the winter, Eric the Red died, and in the following spring, Leif’s brother, Thorvald decided to sail to Vinland, this time with thirty men. Leif hadn’t met anyone whilst in Vinland, but Thorvald did, and in typical Viking fashion, they drew their axes and slew eight of the nine natives. The ninth, who escaped, was to decide Thorvald’s fate, for as the Vikings slept, the native Indians attacked in great numbers. During the ensuing battle Thorvald was struck in the groin by an arrow. He removed the arrow himself, but the wound was to be the death of him. He arranged his own funeral, where two crosses were to be placed on his grave.
.

The America of the Vikings bore the names: Vinland, Markland and Helluland. Helluland is what is today called Baffin Island, Markland is the coast of Labrador and Vinland is Newfoundland.
.

The most important political event in the history of the Northmen took place when the then Norwegian king, Håkon Håkonson gathered all of the north Atlantic colonies, including Iceland, under one flag, which he called “Norgesvældet” The Icelanders resisted at first but finally capitulated.
.

When Norway was united with Denmark a hundred years later, Greenland was part of the deal, and when the union was dissolved in 1814 ad. Greenland remained under Danish rule.

Translated from the original danish by:
jonmorris@webspeed.dk